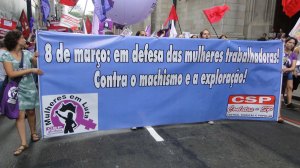 MML is a movement of working class women affiliated to CSP-Conlutas. Comparing to mainstream feminist movement, which has been historically at odds with both labor and Black movements, MML holds a different approach as it advocate for a clear working class strategy to fight for women’s rights and asserts its independence from any government linked to corporations.

Dilma Roussef, the first woman ever elected president of Brazil, and she was supported by the majority of the feminist movement. Even acknowledging that the election of a woman itself is pedagogical to show that women can hold leading positions in society, the MML did not support the Dilma administration because of its class analysis of her program and the previous experience with the PT (Workers Party) and its deals with the IMF and collaboration with major corporations.

The MML explained Dilma’s failure to address the main issues of working class women such as equal pay for equal work, struggle against sexist violence, free childcare centers, legalization of abortion among others. Instead of putting their hopes in Dilma’s hands, the MML insisted that working class women had only one way out: to unite, organize and fight for their rights.

Regarding the issue of racism, the MML recognizes that the feminist movement is in debt with Black women as their agenda was not taken by mainstream feminism which believes that fighting against sexism is enough. The MML supports Black women’s own agenda and role in the struggle as the way to address this historical debt and overcome divisions among the oppressed.