On February 2, the Myanmar Army (formerly Burma) declared a state of emergency for one year and took power once again after exercising it from 1962 to 2011. This coup led to the arrest on Monday morning of the country’s main power figure, Aung San Suu Kyi, 75, and the president of the Republic, Win Myint. Student leaders, ethnic leaders and deputies from the National Democratic League (LND), Suu Kyi’s party, who had won a landslide victory in the November 8 elections, were arrested as well.

A wave of arrests hours before the first session of Parliament resulting from the November elections preceded the coup on February 1. The presidency was temporarily assumed by Vice President Myint Swe, appointed by the Armed Forces. The Army television channel reported that the chief of staff, Min Aung Hlain, remains in command of the troops. Police and protesters have since clashed in Myanmar in violent protests against the military coup. The reaction of the Burmese police was more violent, with the use of rubber bullets, water jets and tear gas. In the capital, Naypyidaw, four people were taken to hospital, one in serious condition. Since the day of the military coup, 133 politicians and hundreds of activists have been arrested. The military junta is blocking cell phone access to the Internet to try to silence protests.

Inspired by acts of democracy that took place in Thailand and Hong Kong, protesters rejected the coup and returned to the streets in several cities in Myanmar. The use of yellow construction helmets, umbrellas and the three-finger salute (from the movie “The Hunger Games, which was first adopted by activists in neighboring Thailand in acts against the alliance between the military and the monarchy last year) are important symbols in the protests and could be observed everywhere. A protest tactics handbook that was used in Hong Kong was also used, translated into Burmese and shared on social media, despite the blockades. As far as possible, opponents of the coup are connecting with other users through the hashtag #MilkTeaAlliance, which brought together activists in Thailand and Hong Kong.

In a statement distributed by social networks, the LND calls on the Burmese people not to accept the coup and to protest against the country’s return to the dictatorship. The Armed Forces unreasonably insinuate that the coup d’état is a response to allegations of fraud in the last elections.

A strong civil disobedience movement affects hospitals, schools and government offices in a country marked by decades of military repression. Highlight for the great presence of young people. The garment workers in Myanmar – about 700,000, from the shoe and tennis industries for export, stopped their activities to participate in the demonstrations. The strike of civil servants, particularly teachers, doctors and nurses, expands. Since the 8th, the country has been living with a General Strike that demands the immediate end of the dictatorship and the resumption of the civilian government, in addition to the repeal of the 2008 Constitution, which grants broad political powers to the military.

Either, we condemn the harassment and threats by the officials to young women worker and union leader Ma Moe Sanda Myint´s house in Hlaingtharyar Township. Ma Moe Sanda Myint, one of the leading persons of the Federation of General Workers Myanmar has been participating actively in the Civil Disobedience Movement together with all the people and workers of Myanmar.

The Brazilian Labor and Popular Federation CSP-Conlutas and their undersigned affiliated unions and organizations repudiate the military coup, and send international solidarity to the resistance struggles of the workers and the Youth of Myanmar.

– Down with Myanmar’s military dictatorship!

– All support for the general strike of workers in the textile industry and public employees! 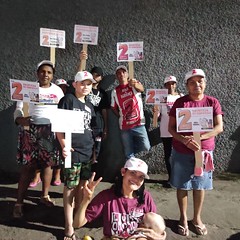