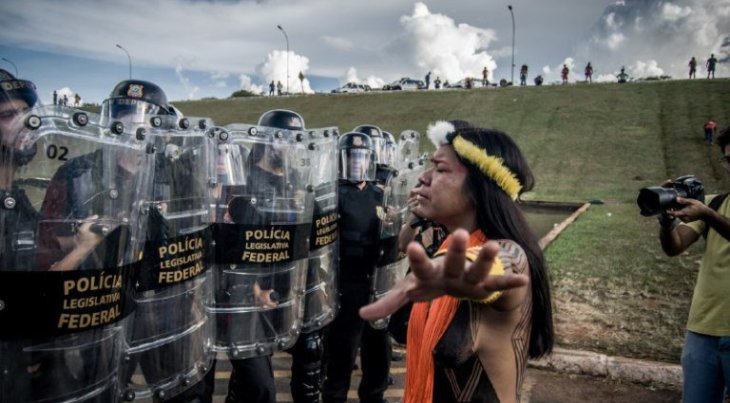 From the military regime to the Workers’ Party (PT) government, indigenous people and rural workers have increasingly suffered attacks against their lands, withdrawal of rights and are victims of a silent and agreed genocide by Agribusiness and large landowners.

During the period of the military regime in Brazil, the Land Statute was established and intended to implement the National Agrarian Reform Plan, but the law was never implemented, and this was another social reform – not – implemented by elites in Brazil. Since then, this initiative has gained the character of an economic policy, and that has allowed over the years the growth and development of agro-pastoralism.

In recent decades, governments and many of the unions and leftist parties have maintained the same political structure that helps concentrate land in the hands of a few owners, and the policy in favour of agribusiness has continued. Even during PT (Workers Party) governments, the scenario did not changed. On the contrary the government of Lula, the businessmen, planters and landowners received innumerable facilities of credit, debt forgiveness and support programs.

This situation resulted in, as a brutal consequence, the death of indigenous, workers and rural leaders, 2016 was the worse year for murders in 13 years, officially recorded as 61 victims.

Based on the CPT (Pastoral Land Commission) report of 2016, nearly one million people have been involved in over 1500 land conflicts for natural resources or labour rights. This number is close to the record of Syrians internally displaced as a result of the civil war.

Land retaking, for the natives, is one of the strategies of fighting for the lands that have been stolen. In a convoy organized by CSP-Conlutas to Mato Grosso do Sul, in August 2016, with some activists of indigenous cause and other popular movements, the Guarani-Kaiowá Natalino Veron reported that he was a “on a hit list to be killed” and that this could “happen at any moment, because gunslingers can attack at any time.” 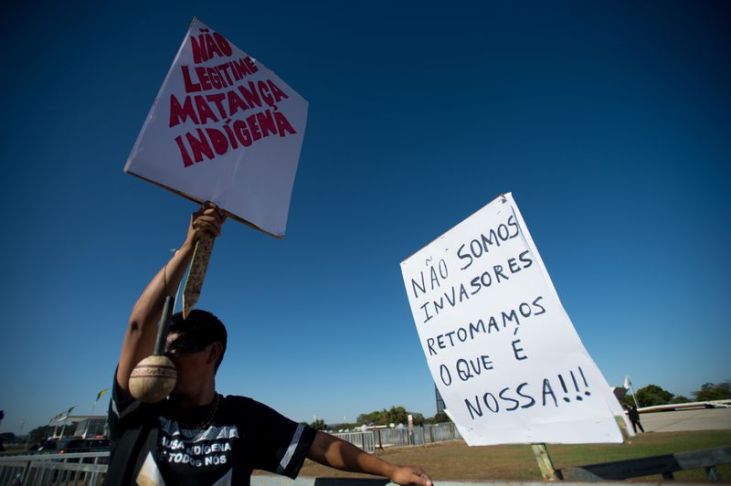 He added that he could not leave the village and go to the city in search of resources, because he knew that the gunslingers hired by the farmer are always waiting for him. “I am hostage, without the right of going and return,” he said

The second Tekohá – Guarani Kaiowa convoy visits the renewed struggle of Ñandeva and Takuara and undertakes to strengthen the struggle of indigenous peoples. 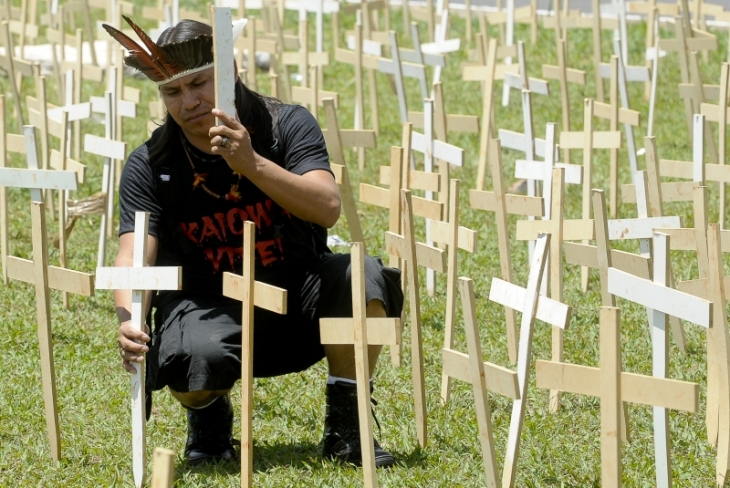 The UN special rapporteur, Vitória Tauli-Corpuz, visited Brazil from 7 to 17 March 2016, specifically to verify the situation of indigenous people. He visited the same village where CSP-Conlutas was, and in her report, among other points, pointed out that the challenges of the indigenous nations are enormous. Among them, he emphasized that “the violence, murders, threats and intimidation against indigenous peoples are perpetuated with impunity.”

More recently, on April 30 of this year, indigenous Gamela were victims of a slaughter in the municipality of Viana, in Maranhão. Five Indians were shot and others were seriously injured.

Inaldo Serejo, leader of the Gamelas and one of the survivors of this attack, says that the offensive was against a group of Indians, who in the moment of tension retreated from a peaceful land retaking in the region. Since the 60s and 70s, the ancestral territory of the ethnic group was invaded and subdivided by land grabbers and farmers. 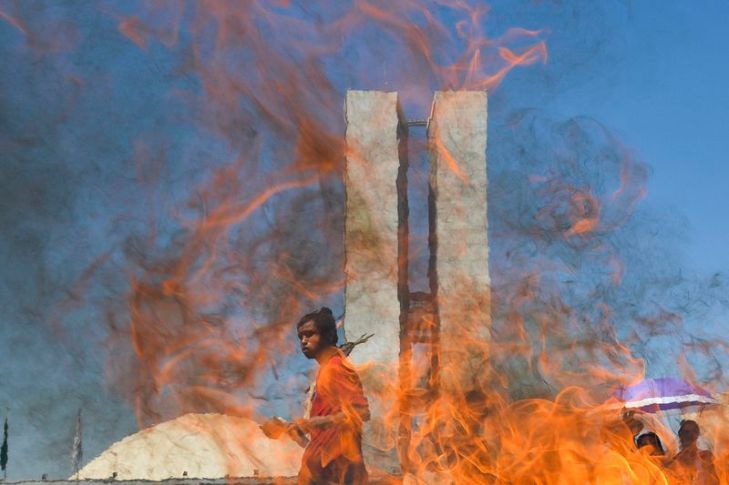 Inaldo emphasized the responsibility of the State for native people and, above all, the deaths that, for him, are the result not effectively assisting natives. “It is no coincidence that the CIMI [Indigenous Missionary Council] has recorded that in recent years, 891 indigenous people have been murdered in Brazil, because indigenous policies have gradually halted and been paralyzed. When we look for INCRA (National Institute of Colonization and Agrarian Reform) or FUNAI (National Indian Foundation), they claim they have no money, but at the same time we see the amount of public money going to agribusiness and JBS [a food company involved in corruption] is an example of this”, he said.

The lawyer and member of the Rural Sector of CSP-Conlutas, Waldemir Soares Júnior, explained that the rural conflict is constant, today agribusiness represents 33% of the balance of trade and there are countless deputies and senators of the sector, who interfere with land policies. “After all, settlements, demarcation, titling and conservation units are agricultural frontiers for expansion agriculture. And it seems that the state closes its eyes to that,” he said.

Not only indigenous people are affected by land conflicts, but also rural workers. In 2017, the countryside was once again a place of violent deaths. Fighters were brutally murdered by agribusiness and the large landowners.

In April, in the rural area of the municipality of Colniza, northwest of Mato Grosso, in the week in which the massacre of Eldorado dos Carajás was remembered, nine people were killed, with signs of severe torture. Victims, aged from 28 to 58 years, were tied with mutilated body parts and other signs of aggression. 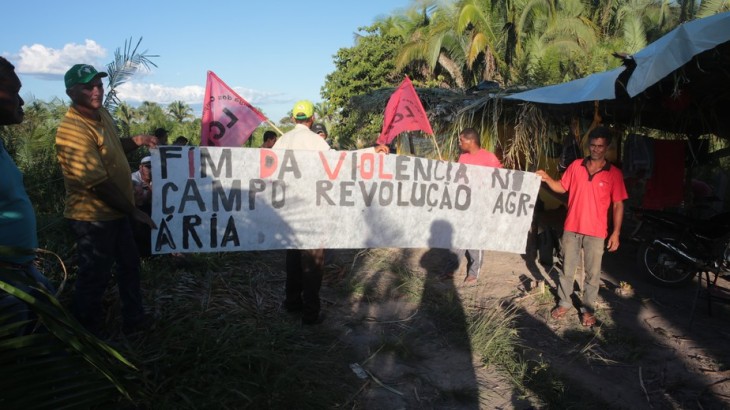 According to CPT, this massacre was just “another chapter of a long history that began in 2004, when 185 families of farmers were expelled from their land by alleged landowners. Even though the judge granted reintegration of land to the families, the conflicts continued,” as published in an official note.

To confirm this historical and predictable conflict, in 2007, three farmers were murdered by farmers and illegal land extractors were suspected. On April 17, CPT’s “Conflicts in Brazil 2016” report denounced the alarming increase in land conflicts in the country, with “61 murders of rural workers in 2016 – the highest number since 2003, 11 more than in 2015 “.

This year, 20 murders occurred. “This number represents 32% of the total 2016. Continuing this escalation of violence, 2017 may be one of the most violent in the fight for land. The Temer government, following the practice of Lula and Dilma, places itself as propaganda for agribusiness and its nefarious agenda against peasants, indigenous and Quilombolas”, Waldemir Soares Junior said.

On 23 April, activist Silvino Nunes Gouveia (51), a regional leader of the Landless Rural Workers Movement (MST), was murdered with 10 bullets, at home, in the Liberdade Settlement, in the municipality of Periquito (MG). 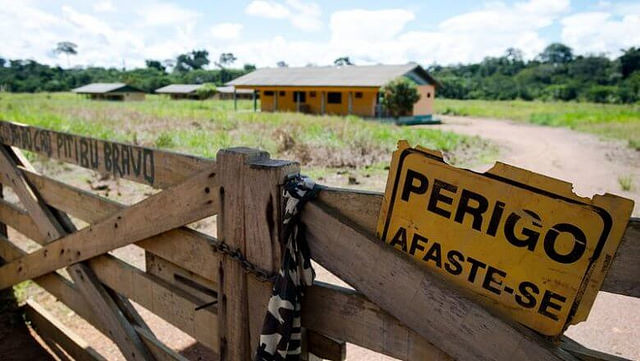 The region also has a violent history against rural workers. According to information from the MST (Landless Movement), in 2004, in the Jequitinhonha Valley, “five workers were brutally murdered by landowner Adriano Chafick Luedy, a defendant who was convicted and sentenced to more than one hundred years in prison. The landowner, however, remains free by decision of the Brazilian justice”.

In the Vale do Rio Doce, according to data from the movement, conflicts over land have intensified, in a region where more than 1,200 families are settled in five camps.

Also on April 9, in the municipality of Captain Enéas, in the north of Minas Gerais, “gunslingers and the land grabber Leonardo Andrade ambushed the families camped on the North American farm, three people who injured by shooting,” the movement said.

The CPT stated that “the murder of these [Mato Grosso] comrades does not simply mean violence against each of them, but also against their families, against the community of Taquaruçu and against all humanity. A direct attack on the struggle for land, for territories, for water, for work, for the struggle for all rights and for the dignity of the rural communities and people “.

CSP-Conlutas, as a Labour Union and Popular organization, defends the permanent mobilization against oppression – we have a ongoing campaign to defend indigenous and rural people – and understands that international support is fundamental for such issues to gain political importance and broader solidarity.