The Federation sent a delegation to the congress of the French Federation Solidaires and the conference of the No Austerity Struggle Front in Italy; Brazilians received support for the General Strike of June 30th.

Members of the National Executive Secretary of the CSP-Conlutas and the Andes-SN participated of important activities in France and Italy during this last week. The 7th Congress of the Union Federation Solidaires, carried out in Saint Brieuc, in France, and the 2nd Conference of the No Austerity Struggle Front in Florence, Italy.

Congress of the Union Federation Solidaires

From June 12 to 15, in Saint Brieuc, the 7th congress of the French Union Federation Solidaires took place. Over 400 delegates participated, with the presence of international delegations of Tunisia, Argelia, Martinica, of the Spanish State and Brazilian.

Internal matters of the Federation were discussed, just as the struggles of the mail, railway, teachers and industry sectors were discussed, and the national political situation and the labor reform of Emmanuel Macron. In this subject, international solidarity was posed for several countries, including the Brazilians and the General Strike in Brazil to stop the Temer administration reforms.

On the Brazilian political context, Hebert Claros made a significant salutation explaining the standing of the Federation in defense of the workers’ rights, also highlighting the corruption scandals much disseminated today.

“The so-called electoral democracy has only revealed that only candidates who receive money from the enterprises, and then rule for the employers and banks win. The president is accused of being involved in a corruption schema, just as 70% of the politicians of the National Congress”, he said.

To show the need of overthrowing any frontier in internationalist struggle, Hebert exposed the attacks of the government against the poor working class, which are not much different from the ones lived by the French in the last period. “As if the economic and political crisis in the country were not enough, the current administration in our country insists in advancing in the Pensions and labor reforms. This last one, as deep as the one [Emmanuel] Macron proposed to you. A reform that seeks to end labor legislation, privileging the negotiation between employer and worker. For us, the only alternative before this is direct struggle”, he said. “Us, from the CSP-Conlutas, who gather both union entities and social movements, believe the only alternative is to build a great General Strike in the country, like the one we carried out in April and take the streets, to actually create among the Brazilian working class an on growing feeling of seizing power as in socialist inspiration, an old feeling of the world working class”, he stated.

Women of the International Solidarity and Struggle Union Network

The week begun with a meeting of the women’s commission, composed by representatives of MML (Women in Struggle Movement – CSP Conlutas), CGT from Spain, and Solidaires from France, to organize the debate of this sector that will be carried out in the International Union Meeting of the International Solidarity and Struggle Union Network (RSISL), which will take place January 2018 in Madrid, Spain.

Marcela Azevedo representing the MML was part of the meeting and contributed with a salutation to the plenary of the Solidaires Congress, telling a bit about the reality of Brazilian women. 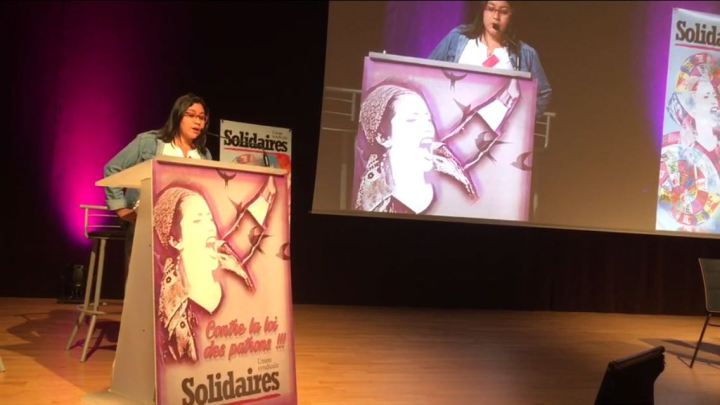 This reality is even worse in countries like Brazil, which occupies the 5th position among countries who murder more women, a country where abortion is a crime and it is the 4th cause of maternal death. Where every 11 minutes a violation takes place. A country where us women are the majority among the 12 million unemployed,” she said.

“Thus, it is essential for union organizations to take on the struggle against male chauvinism and unite working men and women to end oppression and exploitation. From Brazil, we will dedicate to this task and we remain at your disposal to build it along with you,” she concluded.

The Congress adopted a document in support of the June 30th General Strike in Brazil and the mobilized workers against the attacks of the government, which advance in the adoption of reforms and the withdrawing of rights.

Italy: Struggle Front against austerity plans carried out a conference

Metalworkers of Fiat and Pirelli, workers of the transportation sector, telemarketing, logistics and other sectors composed the 2nd Conference of the No Austerity Struggle Front in Italy, carried out June 17 and 18 in Florence, Italy.

According to the representative of the Front, Fabiana Stefanoni, this was “an important moment to reinforce the international struggle of workers, gathered in different categories – among them metalworkers of Fiat and Pirelli, and many demands, like the struggle against dismissal, for the unionization right, for women, who had the possibility of discussing male chauvinism, and our mobilization against the government and its pro—employer measures, which attack the workers, immigrants and women”, she described, saluting the RSISL, represented by the CSP-Conlutas in this activity too.

The Conference voted in favor of supporting the June 30th General Strike in Brazil and the coordination of European mobilization, gathering different union entities of the RSISL, against the attacks workers all over the world suffer.